First and foremost, this was just an unbelievable and amazing experience.  I doubt that I can describe how great this truly was.  Despite the blazing heat, I really loved every minute of it.  Araivapa Running did an outstanding job organizing, marking, designing the course itself.  This was not just a race, it was an experience and an event that has changed my life for the better.  I will never be the same.

This being my first 100 miler, I really did my homework.  I am truly grateful for the sound advice I received from veteran ultrarunners, and from my coach Lisa Smith Batchen.  I used probably half the stuff I brought, but if you do not bring it, you would probably need it!  The gear I did bring was spot on and worked well.  I should have, and I knew it would because I made sure I used it all first.  Race day is obviously not the best time to try something for the first time.

We arrived to Arizona on Wednesday, three days prior to JJ100.  I figured I should probably get acclimated somewhat, because Boston was 35 degrees when we left.  Besides, who would not want to spend as MUCH time as possible in The Valley of the Sun?  We got settled in to our hotel Wednesday, and I got to organize my gear a bit. 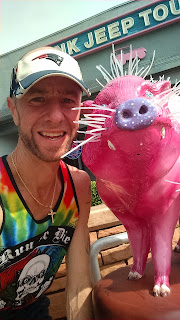 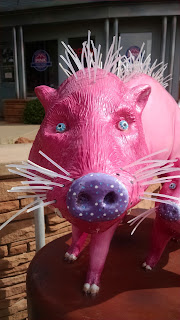 Speed up to Thursday....  Sebastian, Alejandra and your´s truly drove up to Sedona.  If you have not been here, you are missing one of the single most beautiful places on earth.  This is Red Rock Country.  It's very peaceful and serene, and people often go here specifically for spiritual healing. I personally have never ran here, ever.  I have been here close to 20 times but those visits were during   the period of my life I drank like a fish and had not even given running a single thought.  This would be my last run before JJ.  I left town, and found the Broken Arrow Trail. Scored big time!  This is trail porn to say the least.  Single track dope, the most beautiful trails surrounded by red friggin rock. 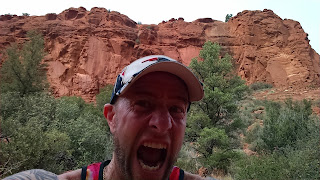 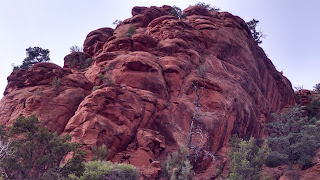 I ran and took photos for an hour, went back to town and ate lunch, grabbed Sebastian, and drove back to Broken Arrow!  We certainly had a blast.  His favorite thing was the dirt! 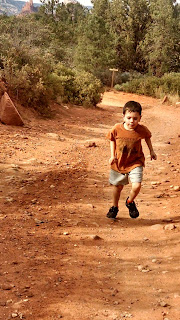 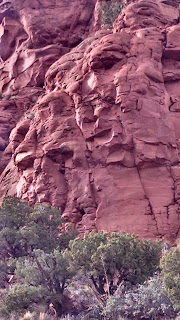 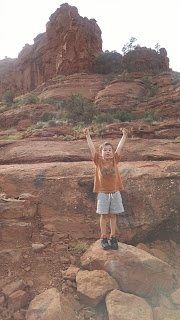 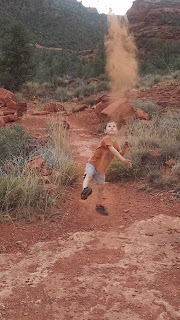 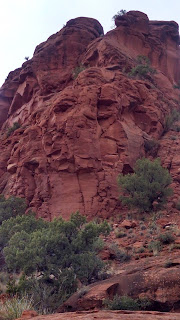 Thursday night we went home and stained the shower with red dirt, I mean, took a shower at the hotel.  We went to a friend's house for stuffed shells, one of my favorites. It was very tasty and right up my alley.  Let the carb loading commence!  Thanks Sam!

Friday  afternoon, Sebastian and I did the expo and bib pickup thing. I met some new friends, and finally met in person some  friends, David Clark,  and Walter Bortman.  It was cool to hang out there and soak up the good vibes.  After that, I ate and went back to the hotel early to get as much rest as possible.  Alarm is set for 4:00 am, race starts at 6:00am. 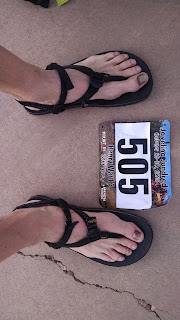 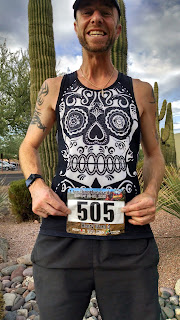 Up and at em´, I depart by 4;20!  It took 40 minutes to get there, which was fine. It gave me enough time to drink my coffee, and digest my Generation UCAN bars.  I parked, and found where I was supposed to be, Jeadquarters! 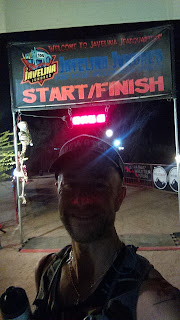 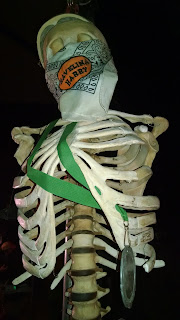 It is time to line up in starting corral.  6am and here we go, holy shit, we are off!  Well, we did not start off like a bat out of hell, in fact we started off by literally walking the first mile due to too many people on single track. I was definitely OK with this because it kept my pace in check.  Everyone I talked to, and everything I read about this RACE said not to start tooooo fast.   I was able to start passing people after the first mile or so, but consciously aware of my pace.  I was averaging about 9.5-10 minutes per mile, in fact that is what I did for 40+ miles.  I felt great, strong, hydrated.  Everything was working well, all systems go. Zero issues.  I used salt capsules and plenty of ice to cool my core, which was key to getting my to where I was in the race.

The trails are not too grueling and everything is runnable.  There are rocky technical areas that were tricky in the dark with tired eyes and tired feet.  All the hills were not too bad.  The terrain is desert dirt!  I ran in Nike Free 5.0s which are street shoes.  I feel like I was fine with these, something heavier would have slowed me down.  I had no plans for a pacer, or a crew.    I did send out a few messages to see if anyone wanted to stop by the race, and my buddy Cliff and his sister Carrie came by!  It was starting to get really hot, and this was a nice boost to see them. I really appreciated them coming, but right after I saw them, I started having awful stomach cramps.  And at the same time, the heat of the day started to get to me.  I had ice in a buff that I kept putting on my face, neck, and body, ice under my hat, and all my heat gear on.  My core just started to get too hot, and my stomach cramps were wearing me down.  I knew I couldn't run through it.  When I ran, it hurt more. Soooooo, I walked...

I  Walked 10 miles to Jackass Junction.  I just kept moving forward.  I was using less energy, and not as hot anymore.  I had to be smart and listen to my body, not my brain. Brain said run through it, body said walk you Jackass!  I had to improvise.  Plan A was not going to work anymore.  My Ace of Spades up my sleeve apparently was having the mental capacity and ability to power walk, and for a looooong time.  At this point, I had met up with Tonja. She is someone I actually interviewed with about a job, small world!  She said that I needed to work on my breathing, and work the acid out.  So that's exactly what I did, I ended up walking mostly from Jackass back to Jeadquartersworking on belly breathing.  Then around 5:00, the angry sun was going down behind the mountains, and it was time to run again!!! Thanks again Tonja! 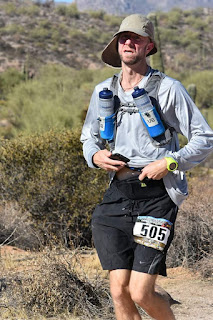 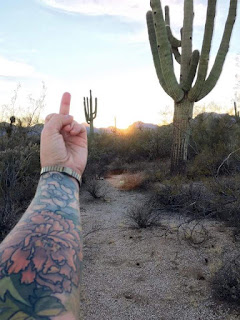 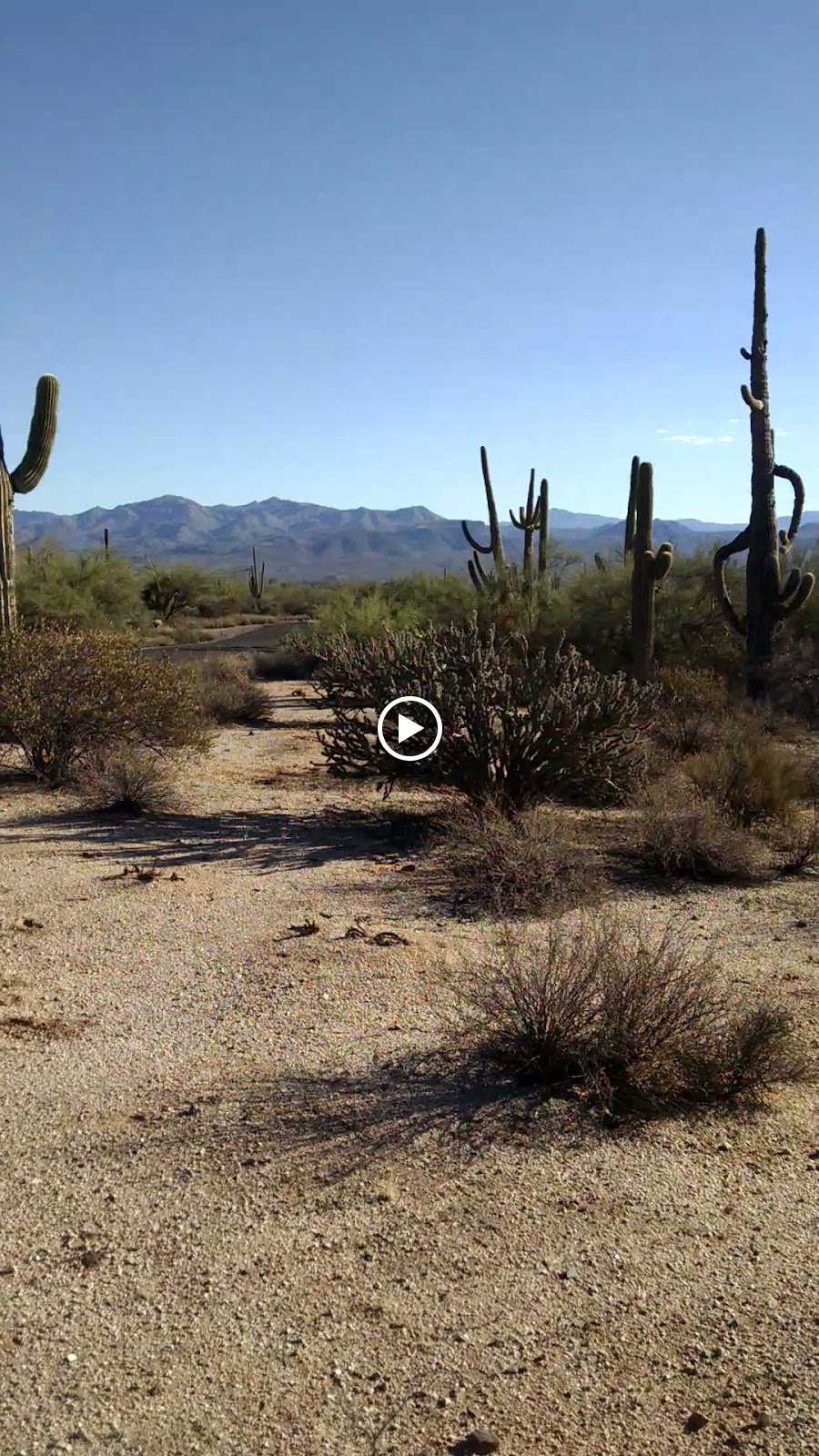 Another thing a lot of veterans said was to make sure to eat.  I ate plenty of watermelon and used Tailwind as part of my nutrition.  I had to start putting something more solid into my system because I was getting low on energy.  They had a large variety of food and snacks at the aid stations, but nothing sounded appealing.  I had to eat, or I was screwed.  They had Ramen noodles in vegetable broth, so I figured it was safe.  It surely was, I ate the shit out of it for the remainder of the race! With the sun gone, I felt much better.  My stomach was fine. No muscle pain at all, truly amazing, as I had surpassed 60 miles (Now in uncharted waters, personal best for distance).  I ran on and off when I could, and started resting for a few minutes at the aid stations while I had my soup, which gave my feet a well deserved rest.  I started to have low energy again, so I tapped in to caffeinated Tailwind.  Nothing.  No lift. Life had to go on.  I didn't feel like running, but knew I needed to keep moving forward.  Soooooo, back to the Ace of spades, more power walking. I knew I would finish, but knew it would be taking me much longer than projected. I probably powerwalked  30 of the last 40 miles!  I could walk faster than run!  Problem was that it is a long time between aid stations.  They seem to never be getting closer.  Each time I arrived, it was a boost, more soup, and another milestone closer to finishing this thing.

Of the course of the race, I saw one runner black out while running, others unconscious at aid stations, and many with severe cramping. Temperature reaches 102 degrees in the day.  It was not Badwater, but it was no joke either.  250 100 mile runners did not finish.  Runners who did not protect themselves from the elements simply did not make it.  One idiot was boasting and bragging at the aid station that he had already drank 22 beers, and was planning on drinking 50 beers during the race,  He did not make.

I got to see the sunrise for the second time during the race on mile 92.  The end was near, but I was not there yet! 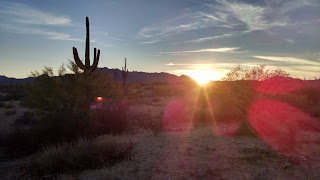 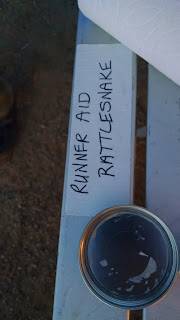 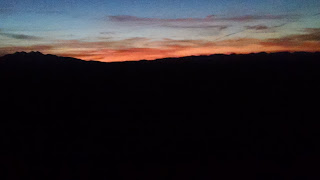 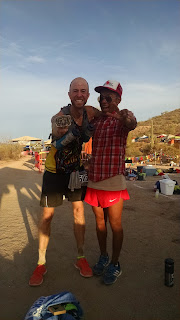 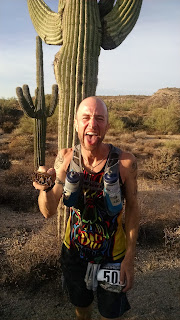 There it was, I could hear the music too, Jeadquarters and the finish line!  25 hours, 17 minutes and 6 seconds later, my first hundred miler is in the books. I felt GREAT!  Mentally exhausted, physically fine, just some tired feet!

I saw some spiders, a rattlesnake that I lost sight of, some little badger things that may have been cute Gremlins, and heard a lot of coyotes howling when the sun went down.  I only saw one, who was friendly and probably would make a great pet.

I would not call it hallucinations like something you might see on shrooms or acid, but Holy shit , everything is so freaking trippy, especially at night.  Everything looks like Willy Wonka or Super Mario Brothers.  When my flashlight or headlight came across some of the cactus, bushes, and other things I stopped a bunch of times just to make sure what the hell I was actually looking at!  Two different times I heard runners mention the full moon.  There was no full moon, it was the globe domed lights as you were approaching Headquarters. It was funny to see some of the costumes at night; I was trying to figure what the F was coming towards me!  At least during the night it was hard to see men who obviously were trying to win The Best Ass contest.  I got stuck behind some G-string food for waaaaaay too long during the day.  Glad he didn't stop short.

So again, absolutely amazing experience, would do it again in a heartbeat.  100 miles is a long time to run, walk,nor just be in my own head.  194,850 steps were taken by me.  That's a lot of steps.  It literally is like running, walking from Waltham, MA to Dennis,MA, or Waltham, past Hartford, CT!
People cannot understand why I or someone would want to do this.  I feel we all owe it to ourselves to see what our own bodies are capable of. Time is too short to sit back and not do crazy shit.

What's next you might ask?  YMCA 5k on Saturday!  After that, I am plotting more madness, more than likely just some long ass fun runs! 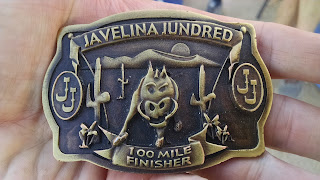