Maine Marathon, qualifying for Boston - Happy Birthday to me!

We looooove to visit Portland.  The food is amazing, it is easy to get around, and has a great vibe to it. I noticed the Maine Marathon was going to be held on my actual birthday, and Alejandra and I decided that a weekend in Portland would be a nice place for my birthday weekend.

My training was more than adequate and my nutrition was as well leading up to this weekend. I have to admit, some of my nutritional choices while in Maine were not the greatest. For example, fried clams, french fries, fried pickles, whoopee pies and Holy Donuts just to name a few.  I did make sure these items were consumed before 2:00 Saturday, and ate plenty of pasta Saturday night for FUEL for Sunday's race.

We woke up and hit the road to the starting line.  No traffic, no problem parking. One of the things I liked about this race was that everything was low maintenance.  No stress.  It was around 45 degrees and started to mist out a bit.  I ran around a little to loosen up.  Ten minutes before the start I lined up in the corral.  It was really neat.  For the first time ever in a race, there were bagpipes!  Also, I looked up and saw drones.  Another first, they used John Deere gator quads as the official pace cars. 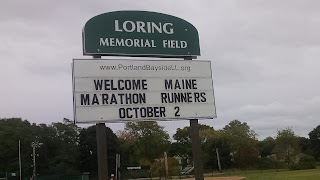 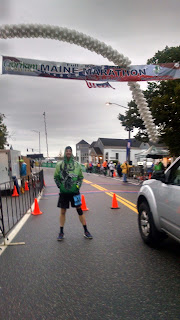 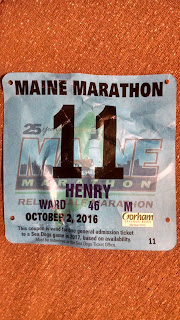 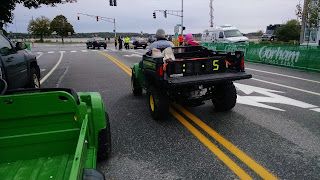 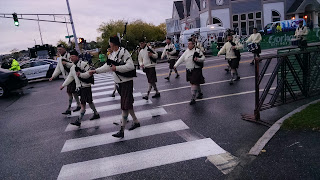 The weirdest thing happened to me after the National Anthem was sung.  I was very foggy in the morning to begin with, and all of sudden it dawned on me that I needed to run 26.2 miles.  I had not really given this RACE much thought!  Not being arrogant, I honestly had not.  My Plan A was to run balls to the wall enjoy myself and run the entire race.  Plan B was to run hard , enjoy myself and do the best that I could, Plan C, just finish, and finish healthy.  Other than that, not much thought!  But there I was, about to run this thing.  I just decided to look at it as a long run, after all it was going to be used as a  training for Javelina Jundred anyways.  I had no pressure, nothing to lose, nothing.  As usual, I decided to just run how I feel, and just enjoy the run.  So that is what I did!

I started off with 800 marathoners, 3,000 half marathoners, and a bunch of others doing the marathon relay.  I fell in a nice groove from the get go, and never looked back. From miles 4-6.5  I had some guy who sounded like Darth friggin Vader right behind me.  I could not shake him.  I moved to the left, and he moved to the left.  I surge forward up, he surges forward.  WTF guy!  Heavy, obnoxious breathing.  I thought about slowing down and letting him pass, but did not want to disrupt my race and pace.  I also thought that mentally that if I let him pass it could ruin my groove and mojo. Finally, I reached the half marathon turn around point.  ALL I can say is that I am forever grateful that Darth Vader registered for the half!  I don't think he could sustain his pace anymore regardless, but I was glad I no longer had to listen to him!

I still felt strong and wasn't even thinking about my time per say.  I just recognized that my splits were consistent, and between 7:15-7:35 mostly.  After mile 16, 17, 18, 19, 20 they were still in this range.  When I got to mile 20, I knew if I could sustain this pace, I could qualify for Boston Marathon!  I always kept in my mind that things could go to shit at anytime, and reminded myself just to keep running the mile I was on.

There have been other marathons such as Wineglass, Arizona, and Erie that the plan WAS to qualify for Boston.  For each of these marathons, I felt my training was adequate, or more than adequate to qualify.  I put the time in, I was eating properly, I ran hills, I rested.  After a difficult time running 23 of 26 miles of the Erie Marathon in considerable pain, I decided to rethink my goals.  I hated this race.  I was a mental case the entire race as well.  I put too much pressure on myself, and was not having fun.  I always said from the beginning of this running journey that if I am not having fun, then what is the point.  I was physically injured for Erie Marathon whether I wanted to accept that or not, and tried to push through.  All I ended up doing was running injured, and overcompensated on the other side of my body, which caused both legs to implode in mile 3!  I felt like quitting.  I had to so listening to music, I was a mental mess.  I  pushed through to see if I could get used to the muscle pain and fatigue, which I am glad I was able to.  I suffered, but I recall telling myself that I suffered a lot more many times when I was boozing...  That helped keep me going.  I rehabbed my ankle, took the foot off the gas on my training runs, and focused on cross training.  Prior to Erie, I ALWAYS wanted ALL my runs, including long runs, to be under 8 minutes per mile.  I broke down.  I was not having fun.  That is when I decided to run slower so I can go longer, and injury free.  Intensity dictates duration.  Less intense = Run forever!  This was one of the best things I could have done.  I also set aside the qualify for Boston Marathon goals, and shifted to an ultra running mindset.

I ran Baystate, Roxbury,CT, Hyannis, Pittsburgh, and Mexico marathons just for fun. Do not get me wrong, I ran hard and just did the best for these races.  But my expectations and goals were just to have fun, run hard, but finish healthy.  If it just felt right, and just so happen to be in a position to qualify for Boston, then great. If not, then so be it.  I also used these marathons as preparation for ultra marathons.

Well, the Maine Marathon it just felt right.  Everything just worked for me.  No internal issues, no muscle pain or fatigue, no tweaks, no heat, no wind.  After mile 20  I was passing people who had passed me earlier in the race.  One girl who I fondly remember was Holly.  Holly passed me around mile 4.  Holly had a friend on a bike pacing her the entire race.  This was kinda annoying.  The pacer would hand her a water bottle from her bike, and she would take a few swigs, then just chuck it.  WTF!  Every 1/2 this was happening.  She dressed the part of someone competing in American Ninja or Tough Mudder.  Bandana, straps on her arms, KT tape all over her body!  I don't mean to make fun of people but....... She and her silly pacer were ultra annoying.  The pacer friend kept telling her she looked strong, looking good, all the typical cliche saying spectators yell at marathon runners.  They will say this even as someone has obvious distress.  I saw someone yacking and someone still said looking good!  I got to mile 24, and was like, "Holy shit, it's Holly!  I knew at this point that unless I totally imploded, I was in line to qualify with a little cushion of time.  I passed Holly and her friend, which put a little more bounce in my step for sure.  I still felt great so I decided to run as fast as possible to see how much was left in my tank. Surprisingly, I was able to finish strong.  I qualified for Boston.  What an unreal feeling.  I was just planning on enjoying my birthday long run, what a bonus!!!

I think the key was just being loose, not putting any pressure on myself, and being healthy. For those that are trying to qualify, put the time in, and your day will come.