First and foremost, this carrera (race) was an amazing experience to take part in.  I cannot express enough gratitude for the crowd support, and the runners.  Just like in Boston, you can really feel the good vibes, and intensity.  This was my 13th marathon, and I would have to say, (sorry Pittsburgh) that Mexico is my favorite.

The training was pretty intense at times, averaging about 70 miles per week, which is also for the TARC fall classic 50 miler.  I personally would like to thank my coach
Lisa Smith Batchen for your time, great workouts, and mostly for having faith in me. Thank you Lisa!  You are so inspiring and encouraging!

We arrived to Mexico late on Tuesday August 23rd.  I got a decent night's sleep, and woke up feeling great.  Lisa scheduled me for 10 miles.  I have never really ran much during the week of a marathon.  I typically have preferred to be well rested.  I had felt like I should rest and not risk being tired, or overtrained.  This time was different. It made sense to me, I needed to get acclimated to the 7,381 feet of elevation gain. Boston is at sea level.  I needed to get some running in, to allow my legs and lungs to get used to the altitude change.

In general, it is definitely challenging to run here.  Mexico City is the 5th largest city in the world, with 22 million people living here.  People are coming and going in all directions, all the time.  Cars, pedestrians, motorcycles on the sidewalks.  There is a lot of pollution.  People in cars, will run you over or should I say, they have the right of way, every time. The sidewalks are broken up, you really have to watch your footing.  Urban trail running!

I got my 10 miles in, and felt great.  Just like anything, I tried to make the best of it, took a bunch of pix, and enjoyed being back running here. 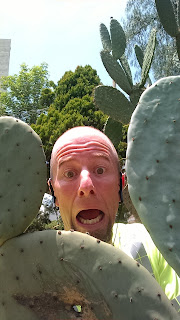 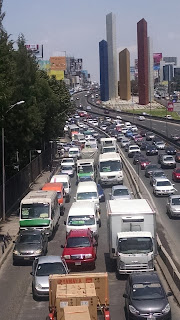 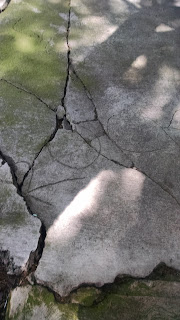 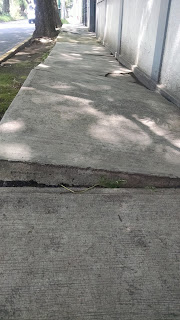 I did not notice a significant difference in the altitude change in my middle miles, but definitely at the beginning and end of this run.  I was scheduled for 10 miles on Thursday, and ran 7, I simply ran out of time.  With that being said, I was acclimated, and ready for the Marathon on Sunday.  I was supposed to run 3 miles Saturday, and had Friday off.  I more or less ate and hydrated, and spent time with family and friends.

Friday morning, we called an Uber to take us to the expo at the World Trade Center,  We arrived there only to discover that the location of the expo was changed!  The way we found out was because my wife asked someone there, and they said it was only communticated via Facebook.  We called another Uber and off we went.  The expo was nice, and it was cool to connect with our close friends from the United States.

Saturday, we went to a place called Desierto de los Leones. Carb loading continued, I had multiple quesadillas for breakfast, which were to die for.  We stopped at a place on the way back called Las Fresas, "The Strawberries." Friggin yummy! 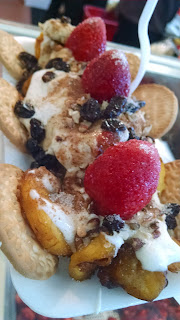 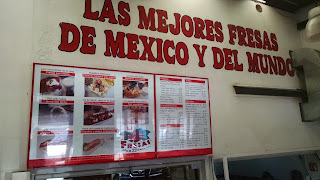 We came home, and went for dinner and I fueled up on pizza for two. Time for bed, alarm is set for 4:20.  Haha, 4:20!  7 years ago, would NEVER have been in this position.  I would have been severely hungover from a marathon of Corona's and Tequila the previous night.  I woke up before the alarm, had everything ready the night before.  At 5:00, my wife called an Uber.  Off I went...

I arrived to the area of the starting line, and met up with Enrique and Maritza again.  We chatted, and took a few pix, then hopped the gate, to be with 36,000 of our closest friends.

They started the race a little late, which was fine, we enjoyed the company in the corral, especially that of a 69 year old guy we were chatting with.  He told us a bit about the course, and shared stories, then before we knew it, it was time for us to run. 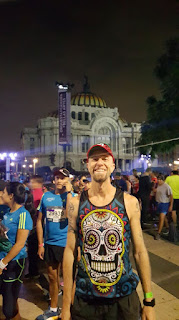 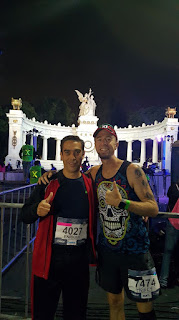 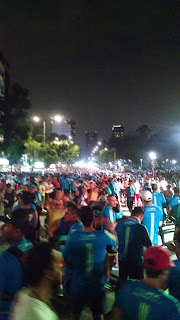 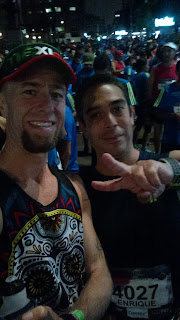 We started running, well, doing the jogging in place thingy. Tooooo many people.  I imagine that there were between 1,000 and 2,000 runners in front of us.  Hard to say, but once we started running, it seemed like 22 million!  After 1k, I started bobbing, dodging, and weaving as if I was Barry Sanders in techmobowl.  It was extremely difficult, with still soooooo many corredores in the way, to make ground.  I kept at it, and fought for position, and kept passing and moving up, the best I could.  I kept a great pace, but also kept in mind that if I kept my current pace, I would have a strong finish.  Much to my surprise, the bobbing and weaving NEVER ceased.  I enjoyed photobombing several runners who seemed to think it was ok to take selfies while running.  The course was packed from start to finish.  I enjoyed the challenge of moving up, and tried not to be annoyed.  I made it a game.  Let's see how many people I can pass.  Game on.

As I mentioned in the beginning, the crowd was so supportive, and totally into the event.  I constantly heard "Vamos, vamos corredores animo, si se puede!". They had several aid stations with water and Gatorade in the 1st half of the race,in the 2nd half the aid was lacking, rigth when runners needed it the most but to my surprise spectators provided  their own aid; There were people with dulces (candies), water, soda, honey, and generic plastic bags with God knows what!  Could have been motor oil, or water from a puddle, I was not gonna try it!  I assumed it was soda.

Mile 17, all that side to side movement caught up to me, as my hip and IT started getting funky, and my pace diminished.  Mile 19, I met up with Erick, a dear friend of my wife from college.  He paced me for the final 10k.  I ran the entire race, no walking breaks.  Thanks to Erick for staying with me, we were still passing everyone at this point.  There were less than 5 people who passed me for the entire race.  Mile 24, I got to see my wife!  I gave my favorite person a kiss, and we were off again.  By this point, and after, the casualties were everywhere. Lots of down runners due to rising temperature, and cramping.  We continued to push the pace, and really went for it at this point.  We approached the Olympic Stadium, and the end was near.  At this point, we were sprinting.  We finished, with a time of 3:39:01.  I was really pleased with my time, considering the altitude, and amount of people I had to pass.  I finished officially in 3,473rd place out of 35,000+ runners.  As I looked at the times for runners, I noticed that the race organizers had counted runners who did not have entries for all there checkpoint time splits.  Meaning, that they did not complete the entire race, but were given credit and placed ahead of me!  Kinda skewed, but whatever...

I took Monday off to rest my hip.  Thankfully, I was not sore muscle wise.  I was supposed to run 14 easy miles, but decided to listen to my body, and rest.  I ran 13 miles on Tuesday, and felt great.

I definitely want to run this again.  It was a lot of fun.  Though I will say that I am looking forward to the TARC fall classic 50 miler the day after we arrive back from Mexico.  It's in the woods, no pollution, no dodging and weaving, and less altitude! 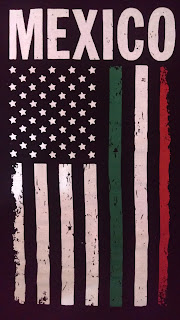 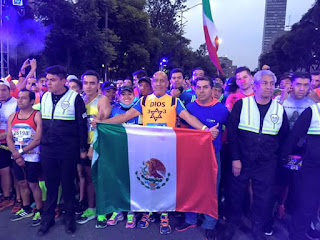 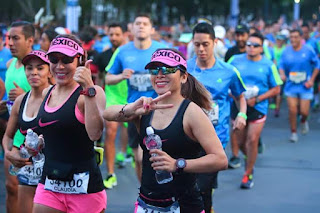 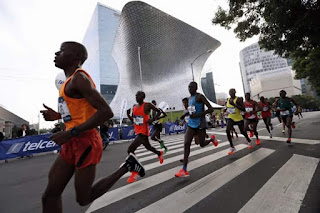 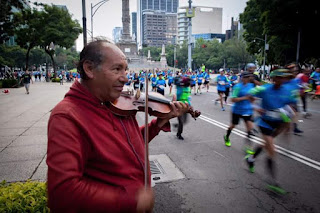